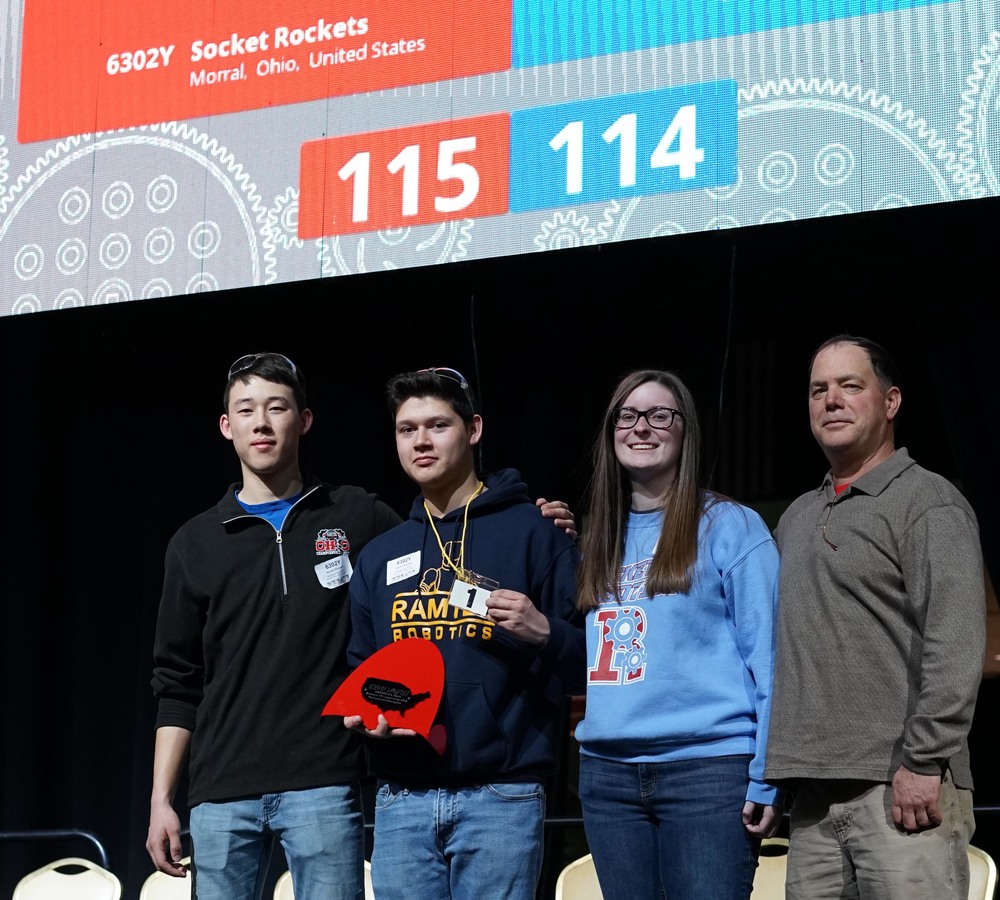 The Ridgedale 6302Y Vex Robotics team is proud to be Tournament Champions at the 2018 Create U.S. Open Robotics Championship. This past April 4th, 5th, and 6th the Ridgedale Rocket Robotics team of Jaylin Tyler, Madison Britton, and Mitchill Reasoner traveled to Omaha Nebraska to compete. The Create U.S. Open Robotics Championship had 180 teams in the High School Division. The pits at the U.S. Open had State Champions Banners hanging from numerous states throughout the nation and China.

Ridgedale 6302Y struggled at the Create U.S. Open for 2 days in the Qualifying Rounds. Ridgedale 6302Y finished 5 and 5 after qualifiers. This record created a ranking of 31st out of 91 teams in the Black Division of the High School contest. Ridgedale 6302Y was concerned about even being picked for the Championship Tournament. The 1st and 2nd ranked teams were from Nebraska and Wisconsin. They were looking for a 3rd team to join the #1 seeded alliance in the tournament. They watched Ridgedale 6302Y and felt that 6302Y was a very strong competitive team and, that the qualifying record of 5 and 5 reflected some very difficult matches with poor allies. Although Ridgedale was ranked 31st out of 91 the 1st and 2nd ranked teams were pleased with Ridgedale as an alliance partner. Ridgedale 6302Y performed very well throughout the tournament. The #1 seeded alliance won the Black Division Tournament and then beat the winners of the Red Division Tournament 2/3 Matches in the final finals.

“Silent Partner” Ridgedale Senior Liam Parsell helped 6302Y to write some fascinating code to control the robot. Liam Parsell is involved in the Ridgedale Band and Honor Society. Liam wrote code for the robot to “self level” the 2 sided lifting mechanism. If either side fell behind then the other side would slow down till it was even. A gyroscope was used to compare the 2 sides. A gyro was also used to keep the robot headed in the correct direction during autonomous mode. Liam wrote very difficult code that allowed the robot to “self-correct” in the right direction” if someone bumped it during autonomous mode

After all this time together, on Saturday these friends were to compete in their last robot contest together. It was thrilling that this last match made them Tournament Champions at the Create U.S. Open Robotics Championship.